A car burned during a raid by the Khost Protection Force in Tani district, Khost province, Afghanistan, July 28, 2019.

The 53-page report, “‘They’ve Shot Many Like This’: Abusive Night Raids by CIA-Backed Afghan Strike Forces,” documents 14 cases from late 2017 to mid-2019 in which CIA-backed Afghan strike forces committed serious abuses, some amounting to war crimes. The US should work with the Afghan government to immediately disband and disarm all paramilitary forces that operate outside the ordinary military chain of command and cooperate with independent investigations of all allegations of war crimes and other human rights abuses. 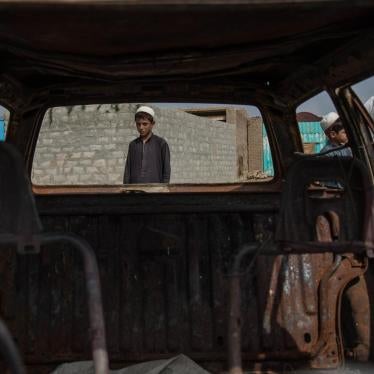 “In ramping up operations against the Taliban, the CIA has enabled abusive Afghan forces to commit atrocities including extrajudicial executions and disappearances,” said Patricia Gossman, associate Asia director and author of the report. “In case after case, these forces have simply shot people in their custody and consigned entire communities to the terror of abusive night raids and indiscriminate airstrikes.”

The report is based on interviews with 39 local residents and other witnesses to night raids in Ghazni, Helmand, Kabul, Kandahar, Nangarhar, Paktia, Uruzgan, Wardak, and Zabul provinces, as well as with Afghan human rights groups that have documented these raids.

Since 2001, the CIA has maintained a counterterrorism operation in Afghanistan parallel to but distinct from the US military operation. It has continued to recruit, equip, train, and deploy Afghan paramilitary forces in pursuit of Al-Qaeda and Taliban forces, and, since 2014, militants affiliated with the Islamic State (also known as ISIS).

Night raids by these strike forces aimed at killing or capturing insurgents largely occur in rural areas that are under Taliban control or contested. The forces breach the walls of residential compounds, search the homes, and question the inhabitants. Some men have been detained without their families knowing their whereabouts. Others have been summarily shot.

In many of the night raids Human Rights Watch investigated, strike forces attacked civilians because of mistaken identity, poor intelligence, or political rivalries in the locality. These units have also sometimes targeted houses based on intelligence that family members had provided food to Taliban or ISIS insurgents, even if under duress.

A resident in Wardak province told Human Rights Watch that the strike force “destroyed the gate to our compound with an explosive device. They killed one of my sons at the back of our home and took the other with them.… The forces accused us, ‘Why are you feeding the Taliban?’ But the Taliban come asking for food. If you don’t feed them, then they harass you.”

In Paktia province in August 2019, a paramilitary unit killed eight men who were visiting their families for the Eid holidays and three others in the same village. Witnesses said none offered any resistance before being shot. The forces fatally shot a 60-year-old tribal elder in the eye and his nephew, a student in his 20s, in the mouth.

In ramping up operations against the Taliban, the CIA has enabled abusive Afghan forces to commit atrocities.

Afghan community elders, health workers, and others described abusive raids as having become a daily fact of life for many communities – with devastating consequences. One diplomat familiar with strike force operations referred to them as “death squads.”

Night raids have often been accompanied by airstrikes that have indiscriminately or disproportionately killed Afghan civilians. The dramatic increase in civilian casualties from US air operations over the past year may reflect changes to tactical directives eliminating measures that had formerly reduced civilian harm, including limitations on striking residential buildings. The US and Afghan governments have not adequately investigated alleged unlawful airstrikes in Afghanistan. In one case Human Rights Watch investigated, an airstrike called in by strike forces in Nangarhar killed at least 13 civilian members of two families, including several children.

“The US and Afghan governments should cooperate with independent investigations into these allegations,” Gossman said. “These are not isolated cases but illustrative of a larger pattern of serious laws-of-war violations – and even war crimes – by these paramilitary forces.”

The laws of war protect patients, including wounded fighters, and all medical personnel from attack. While medical facilities can be searched to ensure they are genuinely providing medical services, it is unlawful to disrupt facility operations or confiscate medical equipment.

“CIA-backed Afghan forces in case after case have disregarded protections to which civilians and detainees are entitled, and have committed war crimes,” Gossman said. “The US and Afghan governments should end this pathology and disband all irregular forces.”

On October 30, 2019, the CIA responded to Human Rights Watch’s report.