Japan’s government should stop forcing transgender people to be surgically sterilized if they want legal recognition of their gender identity.

(Tokyo) – Japan’s government should stop forcing transgender people to be surgically sterilized if they want legal recognition of their gender identity, Human Rights Watch said in a report released today. Requiring a medical intervention as a condition of having their gender identity legally recognized violates Japan’s human rights obligations and runs counter to international medical standards.

“Japan should uphold the rights of transgender people and stop forcing them to undergo surgery to be legally recognized,” said Kanae Doi, Japan director at Human Rights Watch. “The law is based on an outdated premise that treats gender identity as a so-called ‘mental illness’ and should be urgently revised.”

In Japan, transgender people who want to legally change their gender must appeal to a family court under the GID Act, which was introduced in 2004. The procedure is discriminatory, requiring applicants to be single and without children under age 20, to undergo a psychiatric evaluation to receive a diagnosis of “gender identity disorder,” and to be sterilized. This is regressive and harmful. The requirements rest on an outdated and pejorative notion that a transgender identity is a mental health condition, and compel transgender people to undergo lengthy, expensive, invasive, and irreversible medical procedures. Transgender people in Japan are forced to undergo a barrage of invasive surgeries – including sterilization – to be legally recognized according to their gender identity. But many Japanese people are completely unaware these damaging practices are happening.

The report is based on interviews with 48 transgender people, as well as with lawyers, health providers, and academics from 14 prefectures in Japan.

Transgender people told Human Rights Watch that Japan’s law infringes on their rights. One transgender man said: “I don’t want to [have surgery], to be honest. However, I have to just because it is a requirement…I feel pressured to be operated on – so terrible.”

Others explained the trade-offs they felt forced to make. “Of course I want to change the gender on my official family register, and have relationships with my significant other,” said a transgender woman in Tokyo. “But the walls that I have to overcome are just too big.”

In recent years, regional human rights courts and other rights bodies have found that legal requirements such as Japan’s violate international human rights law. In 2013, the United Nations special rapporteur on torture noted that transgender people being “required to undergo often unwanted sterilization surgeries as a prerequisite to enjoy legal recognition of their preferred gender” was a human rights violation and called on governments to prohibit the practice.

The World Health Organization (WHO) published its new International Classification of Diseases, which removes “gender identity disorders” from the “mental disorders” section much like the American Psychological Association did in 2012.

The new edition of the ICD will be presented to World Health Assembly member countries in May 2019 for endorsement. It reframes “gender identity disorders” as “gender incongruence,” and moves the diagnosis from the chapter on “mental disorders” to a chapter on sexual health. 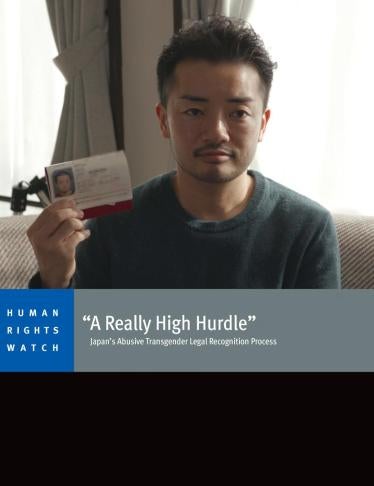 In January 2019, Japan’s Supreme Court, ruling on the case of a 43-year-old transgender man who did not want to be sterilized, upheld a lower court ruling that the sterilization requirement did not violate Japan’s constitution. However, the four-judge bench noted that “it cannot be denied that there is an aspect in which freedom from invasion of the physical body is restricted.”

Two of the justices recognized the urgency of the situation, and the need to reform the law. “The suffering that [transgender people] face in terms of gender is also of concern to society that is supposed to embrace diversity in gender identity,” the two justices wrote in their concurring opinion. They concluded that for transgender people, being “able to receive rulings of changes in recognition of gender status…is an important, perhaps even urgent, legal benefit.”

The Education Ministry issued a “Guidebook for Teachers” in 2016 that outlines how to treat LGBT students in schools. In 2017, the ministry announced that it had revised the national bullying prevention policy to include LGBT students.

In 2018, in anticipation of hosting the 2020 Olympics, the Tokyo Metropolitan Government passed a law that states “the [city government], citizens, and enterprises may not unduly discriminate on the basis of gender identity or sexual orientation.” Japan has also voted for two UN Human Rights Council resolutions to end violence and discrimination on the basis of sexual orientation and gender identity.