(Beirut) – The authorities in Syria should address as a priority what happened to people who disappeared in the custody of the Islamic State (also known as ISIS) while the group controlled parts of Syria, Human Rights Watch said in a report released today. Authorities in de facto control of areas formerly under ISIS control should make information-sharing with families a priority and help create a formal system to address the issue of the missing and allow families to register their cases. 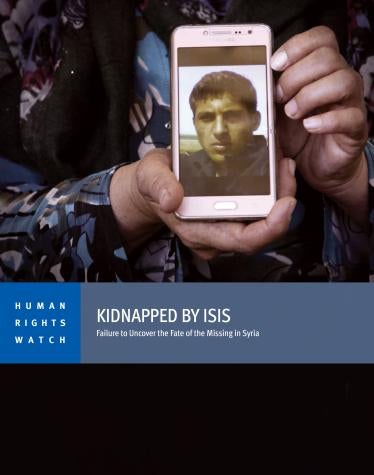 Failure to Uncover the Fate of Syria’s Missing

Download the summary and recommendations of the report in Turkish

Download the summary and recommendations of the report in Kurdish

The 57-page report, “‘Kidnapped by ISIS’: Failure to Uncover the Fate of Syria’s Missing,” highlights 27 cases of individuals or groups apprehended by ISIS and last heard of in its custody before the group’s military defeat. They include activists, aid workers, journalists, and anti-ISIS fighters from a range of groups, government and anti-government, as well as residents living under ISIS control. While the number of missing is uncertain, the Syrian Network for Human Rights has documented 8,143 cases of people detained by ISIS whose fate remains unknown.

“The numerous crimes of ISIS include kidnapping and disappearing thousands of activists, journalists, and humanitarian workers as well as adversaries,” said Joe Stork, deputy Middle East director at Human Rights Watch. “Their families’ anguish is only compounded by the failure of the authorities to prioritize uncovering information about what happened to them, almost a year after ISIS’s defeat.”

In March 2019, the United States-led coalition against ISIS and the Syrian Democratic Forces (SDF), a Kurdish-led coalition, declared that Islamic State fighters had been defeated territorially. Families of those missing told Human Rights Watch that they had hoped that the defeat would quickly lead to information about their loved ones, but authorities have failed to prioritize obtaining or disclosing information to families in most cases.

Human Rights Watch spoke to family members who described their anguish at fruitlessly pursuing rumors, receiving promises of information in exchange for payments to dubious intermediaries, and visiting former detention centers in hopes of finding clues about their missing relatives. People living in northeast Syria said that they sought information from security posts staffed by the Asayish, Kurdish security forces, local civilian councils, individuals in positions of authority, hospitals, and first responders excavating mass graves, but that they rarely received answers.

People whose relatives had been in areas now under the control of Syrian government forces similarly said they received only speculation that ISIS killed all its captives, or blanket denials of any knowledge. Families told Human Rights Watch that if their relatives had been killed, they still wanted to bury them properly to achieve closure.

The US withdrawal of troops in October 2019 and the subsequent offensive by Turkey and Turkish-backed Syrian non-state armed groups on Kurdish-held northeast Syria led to a change in authorities with effective control of areas formerly under ISIS, in addition to extensive displacement and human rights violations. Kurdish-led authorities then responded to the Turkish offensive by inviting the Syrian government and Russia to enter territory under its control.

The extent of control by Syrian government, Turkish, Kurdish-led, and US-led coalition forces in former ISIS-held areas remains unclear, further complicating the situation. Under international law, all authorities are obligated to take all feasible measures to account for people reported missing as a result of armed conflict in areas they effectively control and to provide families with information about what happened to them. These changes on the ground highlight the urgency for the authorities to act on any leads available about what happened to the missing people, Human Rights Watch said.

Human Rights Watch reviewed avenues for uncovering information about the missing people. Researchers visited mass grave sites that have been found in Raqqa and Deir al-Zor governorates, where local authorities are struggling to cope with the challenges of properly collecting and protecting information about the bodies recovered, and greatly need support.

People formerly detained by ISIS told Human Rights Watch that ISIS imprisoned them in facilities later bombed by the US-led coalition or the Syrian-Russian military alliance. One former detainee said that the SDF had detained him after he escaped ISIS, mistaking him for an ISIS member.

Each de facto authority in northeast Syria should create a centralized focal point or civilian body to collect information in their respective areas of control about those who vanished under ISIS rule, Human Rights Watch said. This body should reach out to families within and outside Syria. Where such bodies already exist, they should be supported by local authorities and allowed to act in line with international standards. Authorities should also dedicate resources to protect mass graves in line with best forensic practices and prioritize obtaining information from ISIS suspects in their custody about the people ISIS detained, without resorting to unlawful interrogation tactics. Allies, including the US-led international coalition, should commit to the necessary financial and technical support.

Many of the parties to the Syrian conflict, notably the Syrian government, have contributed to the prolonged arbitrary detention or enforced disappearance of tens of thousands of people.

“The end of the territorial control of ISIS provides an opportunity to deliver answers to families whose relatives went missing in Syria and to respect their right to know what happened to their loved ones,” Stork said.