Lawyers march in Istanbul on January 24, 2019 Day of the Endangered Lawyer. The banner reads: “To silence the lawyer’s voice is to deprive the citizen of breath.”

(Berlin) – Turkey has been arbitrarily jailing hundreds of lawyers and putting them on trial in the aftermath of the country’s failed military coup in July 2016, Human Rights Watch said in a report released today. The move is part of the Turkish authorities’ major assault on the right to a fair trial and on the role of lawyers in the administration of justice.

The 56-page report, “Lawyers on Trial: Abusive Prosecutions and Erosion of Fair Trial Rights in Turkey,” examines how since the failed coup, police and prosecutors have targeted lawyers with criminal investigation and arbitrary detention, associating them with their clients’ alleged crimes. The government brings charges against lawyers who expose rights abuses with little or no evidence of their membership of terrorist organizations. Courts have complied with the attack on the legal profession by sentencing lawyers to lengthy prison terms for terrorism on flimsy evidence and in trials that ignore fair procedure. The abusive prosecutions of lawyers have been accompanied by legal amendments that undermine the right to legal counsel for those arbitrarily detained on terrorism charges. 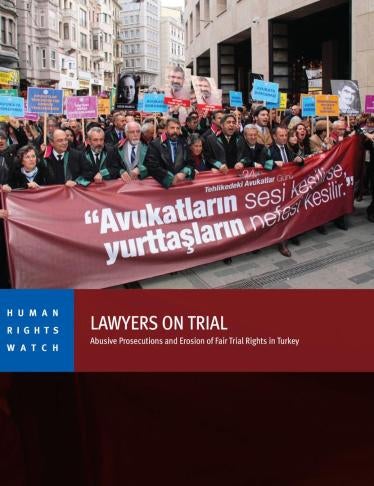 Abusive Prosecutions and Erosion of Fair Trial Rights in Turkey

“Putting hundreds of lawyers in jail and on trial, and restricting their ability to act for people in police custody and in court, shows the dire state of Turkey’s criminal justice system and should be of grave concern to everyone in Turkey and internationally,” said Hugh Williamson, Europe and Central Asia director at Human Rights Watch. “Lawyers are central guarantors of the right to a fair trial and Turkey’s willingness to flout it over the past three years is deeply alarming.”

In a period of mass arrests and politically motivated trials of journalists, rights defenders, and opposition politicians on terrorism charges, lawyers in Turkey have a more critical role than ever to play in protecting the rights of suspects in police custody and defendants in court.

On March 20, 2019, in one recent case, an Istanbul court convicted 18 lawyers on terrorism charges for links with an outlawed leftist armed group. Among the lawyers convicted, 11 received prison sentences ranging from 8 years to 13 years 6 months and one received an 18-year-9-month sentence. Selçuk Kozağaçlı, a human rights lawyer and head of the Contemporary Lawyers Association, which was closed down under Turkey’s state of emergency, was sentenced to 11 years and 3 months in the case. After the verdict, 39 heads of bar associations across Turkey condemned the “repeated violations of the right to a fair trial, of the criminal procedure code and of provisions of the law by the court.”

In another verdict on March 29, an Ankara court convicted 21 lawyers, handing down sentences of up to 8 years and 1 month, for membership in the group the government and courts refer to as the Fethullahist Terrorist Organization, which it blames for the coup attempt.

In neither of these two mass trials was there evidence that the lawyers had participated in violent activity or incited violence.

The Arrested Lawyers Initiative has documented the prosecution of over 1,500 lawyers in Turkey over the past three years. One third of them have spent prolonged periods in detention before and during their trials, and first instance courts have convicted 274 lawyers of membership of armed terrorist organizations.

Several measures introduced during Turkey’s post-coup state of emergency, which ended in July 2018, and subsequently made law, undermine the right of a suspect to legal counsel and a defense, Human Rights Watch found.

Lawyers’ privileged communication with their clients in pretrial detention for terrorism offenses has been effectively abolished as authorities are now permitted to record and monitor all such communications. Lawyers can also be barred from acting for a client facing a terrorism investigation for up to two years if they themselves are under investigation for terrorism. And courts can restrict individual lawyers from accessing investigation files of people in police custody on suspicion of terrorism offenses. Police use such court decisions to prevent the lawyers from meeting with detainees.

Measures such as allowing courts to conduct hearings and issue verdicts without lawyers present, by ruling the lawyers have not provided reasons for their absence; to reject lawyers’ requests to hear witnesses because they deem the aim is to prolong the trial; and to deny defense lawyers the possibility of cross-examining some protected witnesses in person in court because their testimony is provided remotely and their voices altered or faces screened, all undermine equality of arms and the adversarial elements of trial proceedings. Equality of arms refers to the fundamental requirement of procedural equality between prosecution and defense to ensure that both sides have the same opportunity and advantage to present their case.

Lawyers interviewed by Human Rights Watch reported that, in terrorism trials, courts have become increasingly unresponsive to their petitions to have evidence critically examined or tested and to hear witnesses for the defense. Lawyers said they were little more than “extras” in court hearings. Equality of arms between the prosecution and the defendant cannot be preserved if the defendant’s lawyer is prevented from mounting an effective defense and if the adversarial elements of proceedings become little more than a formality, said Human Rights Watch.

Human Rights Watch made a series of recommendations to the Turkish government, the European Union and EU member states, the Council of Europe, the Union of Turkish Bar Associations, and provincial bar associations in Turkey, as well as bar associations and lawyers’ groups internationally.

Turkey should end the systematic abusive detention and prosecution of lawyers, Human Rights Watch said. It should allow lawyers to effectively perform their professional functions in accordance with the guarantees provided for in international human rights law, repeal state of emergency amendments passed into law restricting the right to legal counsel, and end mass trials of lawyers and the arbitrary use of terrorism charges.

“Turkey’s government should end its assault on the legal profession,” Williamson said. “The Union of Turkish Bar Associations, other lawyers’ groups, the EU, and the Council or Europe have an important role to play in Conveying that message to Ankara.”